Everyone knows about the food of Spain, but generally people have heard about paella, tapas and Iberic ham, but if you ask them about the popular Spanish desserts, they can only mention churros.

The truth is that there are more delicious desserts in Spain than just churros, and some of theme are very easy to make.

We are going to start this list with one of the easiest Spanish desserts, the “Arroz con leche” or as you may also know it: Rice pudding.

Although it´s a very popular food all over the world, the Spanish style is totally different, and we recommend you trying it. As we said, its recipe is very easy, and you will just need rice, milk, sugar and cinnamon to make it. We are sure you can find those ingredients in your country, right?

The arroz con leche is very popular in Spain, so you will find it easily in restaurants if you visit Spain.

The first Spanish Christmas dessert of this list is turron. Spaniards eat many desserts during Christmas season and turron is one of their favourites.

There are many kinds of turron, but two of them are the common ones: Turron de Alicante (Hard) and Turron de Jijona (Soft). Both types are delicious, but the only problem is that you will need a long time to make them, as its recipes are more complicated.

An important ingredient for the turron is the almond, but don´t worry if you are allergic, because there are other turrones made with chocolate.

Another of the most typical Spanish desserts is the Catalan Cream. Just imagine how good it is, that although its origin is from Catalonia, now it´s popular not just in all Spain, but also in other countries.

To make “Crema Catalana” you will need milk, eggs, corn-starch, sugar, and cinnamon. The best of this dessert is mixing a crunchy caramelized base with the soft cream.

Finding Catalan Cream in restaurants is not that easy, so we recommend you reading our recipe, which by the way is not too hard.

The “Tarta de Santiago” is also one of the best spanish dessert recipes. In this case, the Santiago cake is from Galicia (North of Spain). We are going to warn you, that if you are doing the famous “Camino de Santiago” you can´t finish your trip without trying this popular almond cake.

It´s true that originally, the Santiago Cake was the perfect dessert for those who have spent the whole day walking, but now every tourist try it, and Spaniards love it as well, so you will see it in many areas of Spain.

If you can find almonds, eggs, icing sugar, cinnamon, and butter, then you are ready to make this recipe at home. See our recipe to learn more about it.

Spanish people have desserts for every festivity of the year. The “Torrijas” or also known as bread pudding are very typical during eastern time.

In the spring week almost every family make a bunch of torrijas to eat it during those days, you can also buy it, but its recipe is as simple as frying slices of bread and mixing it with milk and eggs, so we recommend you making it at home.

It is said that torrijas are one of the most traditional and classic Spanish desserts as they are cooked since the V century. It´s a must try!

Another Spanish pudding, but in this case, we are talking about the Natillas, also known as Spanish custard.

The recipe for this traditional Spanish dessert is based on a cream elaborated with milk, egg yolks, sugar and of course the vanilla.

Eating natillas is very common in small villages and places nar the mountain, but you can really find it everywhere in Spain.

Have you ever heard about the Spanish Buñuelos? They are a light and fluffy fried dough balls made with flour, milk, oil and sugar. These are typical during festive seasons and although they look tiny, you will be able to eat many of them (may not be so good for your diet)

Although the common ones are the Buñuelos de viento you can find them filled with cream or chocolate.

They are for sure not one of the most famous Spanish desserts, but in the Iberian Peninsula everyone loves it, so we advice you to at least try them!

One of the reasons why Spanish people get so happy during Christmas time is because they will be able to enjoy their polvorones. Christmas and the previous month are the only time of the year when you can find these Spanish cookies.

That´s the reason why we have prepared a recipe to learn how to make polvorones, because we just can´t deal with only one month of eating polvorones.

For the ones who still don´t know what these are, polvorones are a dusty dessert that will literally melt in your mouth as soon as you eat it. They are normally compared with mantecados, but they are different.

No matter which restaurant you go in Spain, everyone has at least one type of flan in their menus. The flan is also typical in other countries, for example in almost every country of South America they cook it, but in a different way. It´s recipe is quite easy and in just one hour you will have a delicious pudding.

Eggs, vanilla, milk and sugar are the key to make this easy Spanish dessert recipe. Learn more about its recipe.

We had to finish our list of the typical desserts in Spain with the famous churros. I bet you all knew about them already, but for the ones who don´t, the Spanish churros are a yellow/brown fried dough served with sugar or cinnamon.

The churros are normally eaten for breakfast, but you can eat it as a snack or dessert as well. The best way to eat churros is with chocolate. We have prepared an article talking where we tell you the best recipe and everything else you need to know about this famous Spanish dessert.

Spanish desserts that are easy to make?

Sometimes when we visit a country we fall in love with their food, and we wish we could keep eating when we go back home, unfortunately once we are back, either we don´t have enough time to cook the dish or we just can´t find the ingredients. Well, don´t woory, because there are many easy spanish desserts recipes that won´t take you much time:

There are not so many chocolate Spanish desserts, but instead what Spaniards like is to add a little bit of chocolate to normal desserts.

For example, churros are 90% of the times shared with a hot cup of chocolate. You can also find chocolate in the «Manolitos», which are a small croissant typical in Madrid.

Are there any no bake Spanish desserts?

Although most of you are big fans of  the Spanish baking recipes there are also a few no bake desserts in Spain that are delicious and you could try to make at home. Some of the best ones are:

It´s true that although the desserts of Spain are very good, they are not as sweet as in other countries.

For the ones who are looking for Spanish sweets, you should know that the best season to find them is in winter. Some of the best Spanish sweets and candies are the sweet olive tortas, the alfajores and the Spanish caramelized almonds

How are the fruits desserts in Spain?

Fruit desserts are the best, as they are not only sweet and delicious, but they are also healthy. Unfortunately, Spanish people don´t eat so many fruit desserts, but you can still find a few of them that are really good:

Christmas is the perfect time to try Spanish desserts

Christmas Spanish desserts are the favorite for most of the Spanish people, and they are also the reason why everyone starts their diet purposes after new year.

Waiting the whole year for Christmas season is worth it when you think about all the desserts you are going to eat. There are many sweets and types of desserts to choose. Most of them you can only find them in Christmas time, which makes this celebration even more special.

Some of the best Christmas spanish desserts are the roscon de reyes, polvorones, marzipan and turron

Easter is a big celebration in many parts of Spain. That doesn´t mean just some days off, it means that Spanish people get to go to visit their home towns or spend the week at the beach. It also means they get to watch the Spanish processions, but what is most important, it means they can finally enjoy the Spanish Easter desserts!

There are communities like Valencia, Catalonia or Castilla la Mancha that are specialists with the Easter spanish desserts, and this are the ones you must try:

The Spanish locals, as it happens in many places of Europe, eat pastries during the whole day, at breakfast, after lunch… but the most common time to eat the traditional Spanish pastries is in the afternoon as a snack accompanied with coffee.

When we talk about the pastries of Spain, we mean a small and not so heavy dessert. Some of the most famous and best Spanish pastries are the Miguelitos, the Ensaimadas of Mallorca or small palmeras de hojaldre.

Although many of you probably don´t know what is a Spanish pudding, we can tell you that in Spain the majority consider a pudding when a dessert has milk on it.

Spaniards love to use milk on their recipes, that´s why the traditional Spadish puddings are known as some of the best desserts in Spain.

Some of the most popular puddings are:

As it happens everywhere in the world, sometimes for celiacs or people who follow a gluten free diet is hard to find sweets or desserts. Although it´s true that you may miss some special spanish desserts, there is also a huge variety of gluten free Spanish desserts.

Other than the typical Spanish desserts we have mention before, like arroz con leche, flan or crema catalana, there are more that not so many people know about like the Yemas de Santa Teresa

*Ask before eating it, as every cheff makes their dishes in a different way*

Vegetarian people won´t have many problems as most of the traditional Spanish desserts recipes are good for their diet. For example, you will be able to eat the Flan or the natillas. It´s true that you will miss the polvorones that generally are made with pork fat.

The desserts in Spain haven´t been always the same, there has been many changes during the history. The desserts were very different before the Romans arrived at the Iberian Peninsula. When they brought the idea of using not just honey on the desserts, but also wine, it all changed to a more flavory taste.

But when the Moors conquered Spain, was when the real change happened. The Spanish cuisine improved a lot their desserts thanks to the sugarcane.

Now most of the authentic Spanish desserts are served in celebration times, such as Easter or Christmas, and the main reason of it is the combination of religions there has been through the years in Spain.

This was our list of the top 10 traditional Spanish desserts, but we are sure you have many others in mind and we would love to know which ones would you add to your «best spanish desserts menu» Let us know in the comments below. 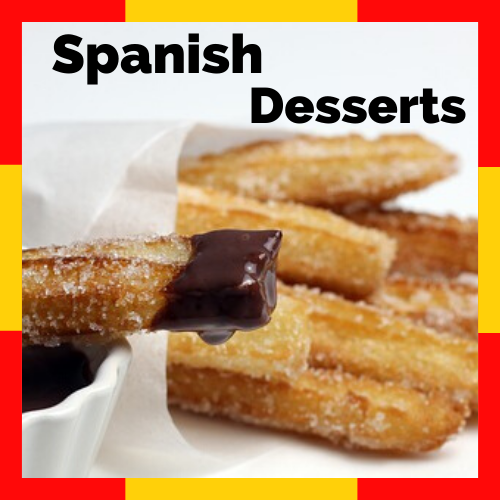 Article Name
🥧 Top 10 traditional Spanish desserts 【 with easy recipes! 🥇 】
Description
I➨ DISCOVER the Top 10 Traditional Spanish Desserts and its recipes!! ✅ There are many desserts in Spain ⭐ but it´s impossible to try them all!!
This website uses cookies. Do you agree? OKRead More
Privacy & Cookies Policy
Necesarias Siempre activado